As compiled during 2021 by Formation and Life Members—   George Kennedy 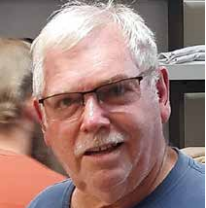 in collaboration with John Young

Layback Longboarders Club (LBL) was formed by George Kennedy, John Young and Peter Wearing on Sunday 1st March 1992, 7:00am at Bellambi Pointbreak car park adjacent to the swimming pools. Seventeen surfers had a short meeting and organized our first ever point score and history was made. 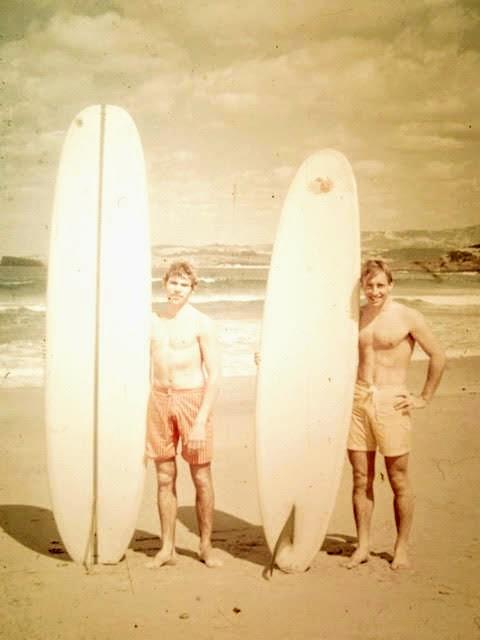 George and John aged 17 at The Farm summer 1967/68 in board shorts made by our girlfriends as surf companies did not exist back then. Board sizes had only just started to get smaller as seen with John’s new “Patrick” surfboard.

Going back a few years John Young and I have been best mates since we were in our teens. We had been surfing in Bali at Uluwatu in really heavy surf on our short boards and were both really struggling in the huge surf but after a few hours finally got it together. It made us realise we were struggling a bit on short boards and not long after we arrived home, Youngie went and saw Mick Carabine who talked him into ordering an 8ft Mal to see how it fitted. Youngie loved it and surfed it a few times before pushing it over to me for a go, well it was one of those moments in life that you never forget. It fitted like a glove, it was perfect. My 20 years short board career was over from that point on and I was back into longboards that I hadn’t surfed since about 1967, when I was 17. 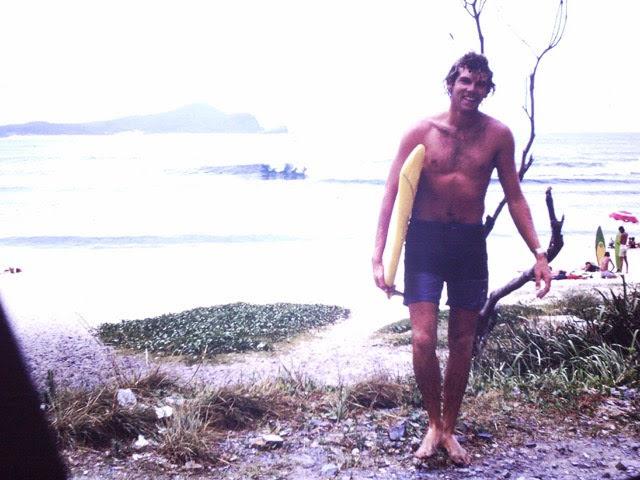 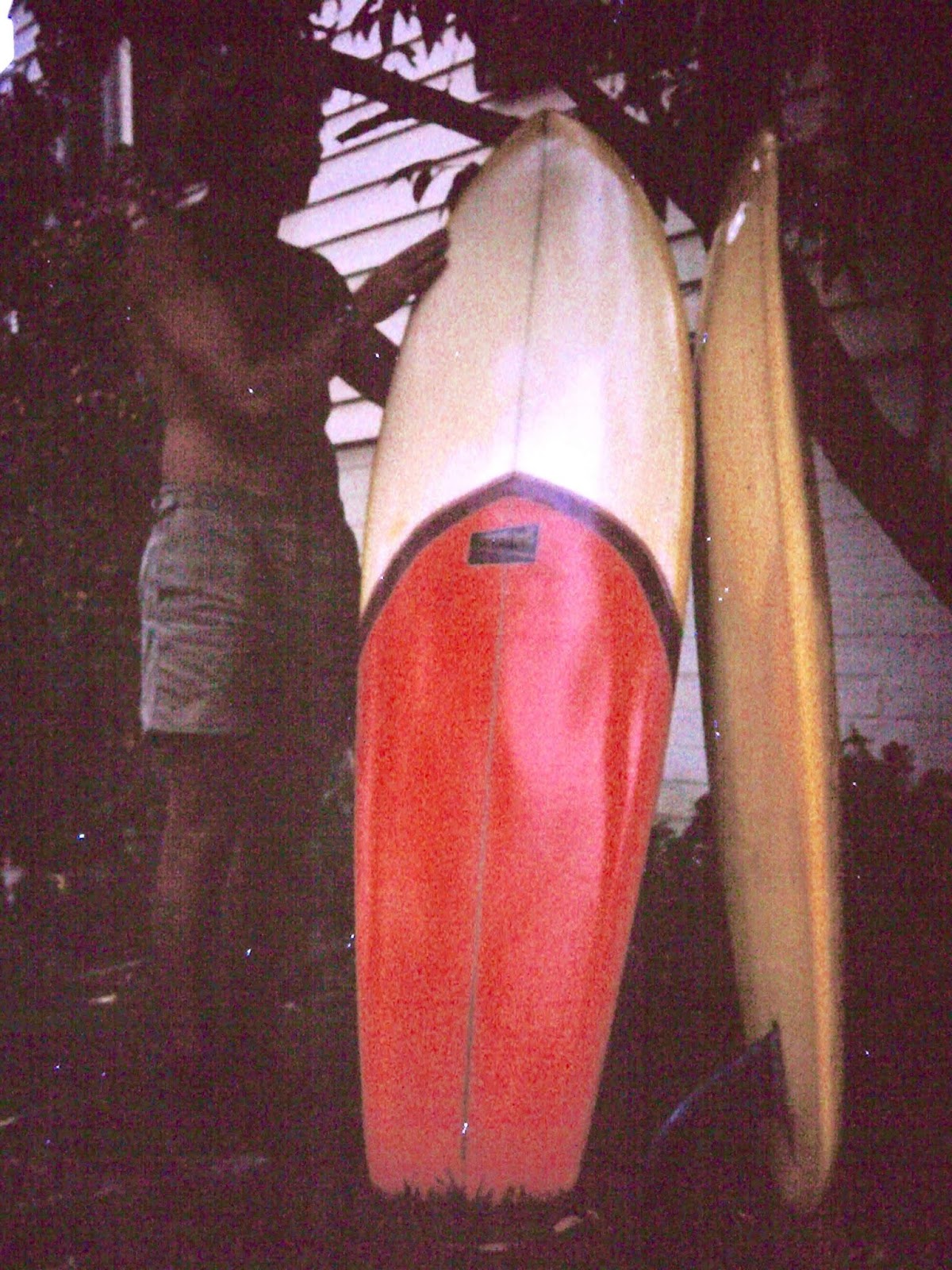 George at Seal Rocks and a couple of my home made boards. A twinny and a single fin about 1969.

Note: Thrusters hadn’t been invented then and twin fins were the new thing. 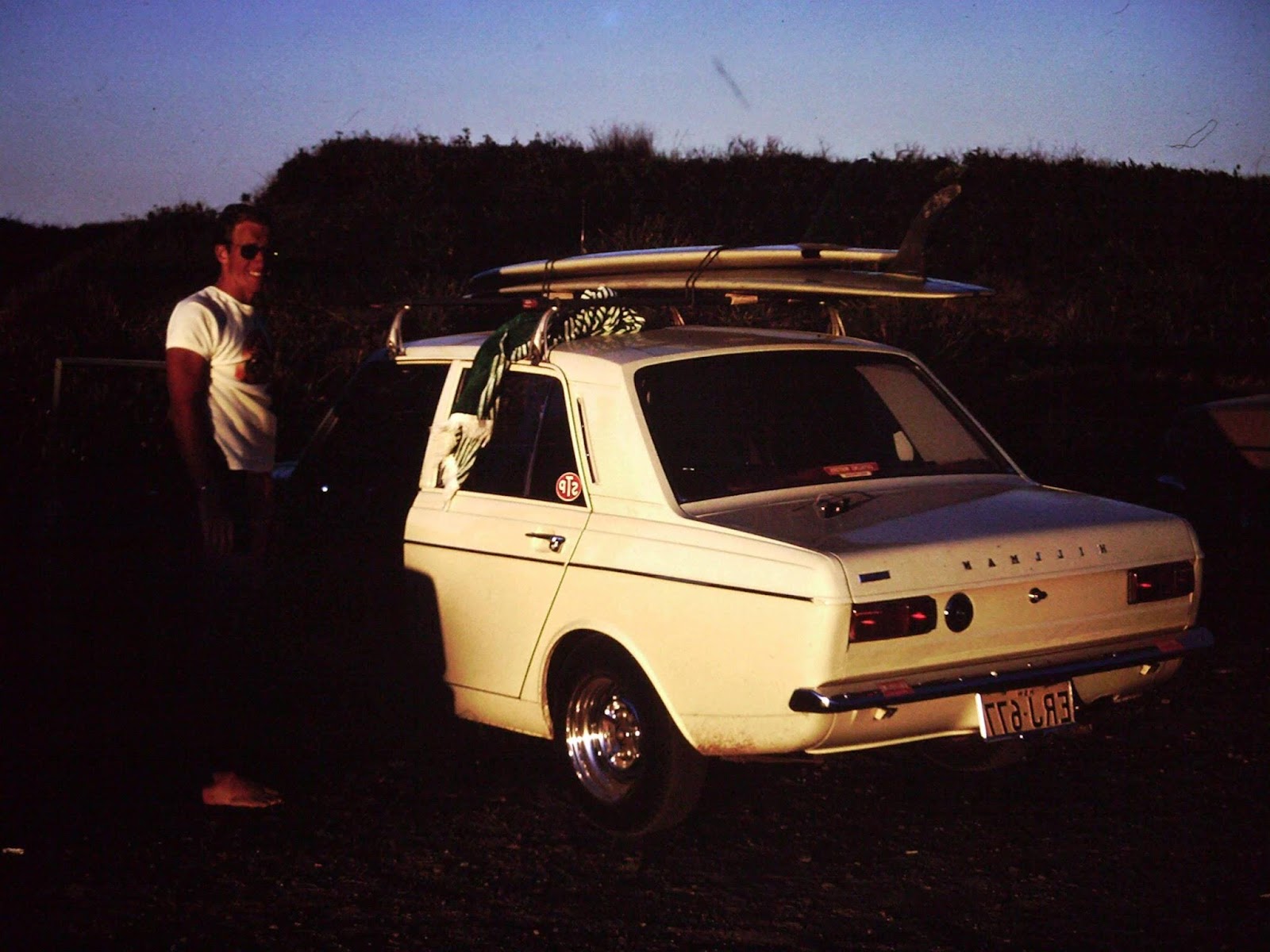 John and his first car early morning surf down the coast 1968. 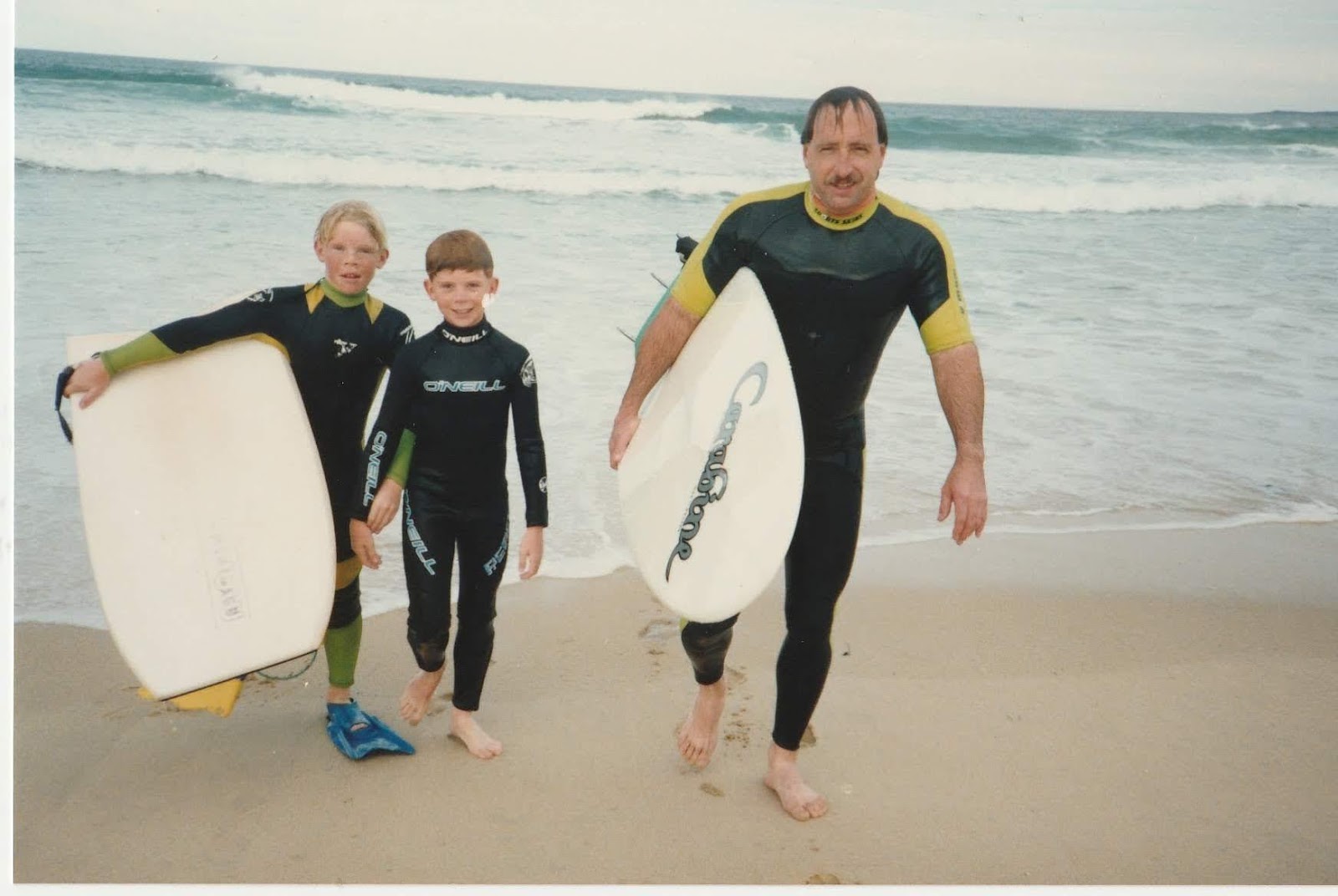 John at The Farm with our son’s Lincoln Y and Rob K during DV8’s State Titles about 1990.

In about 1987 Youngie and I joined the DV8’s down at Shellharbour and really enjoyed the whole board club thing and how it helped improve our surfing. We made a lot of good friends and had raging good times at major contests and presentations after the contests at the Bowlo club…. Aaaaah the stories!

I was driving to Sydney everyday working fulltime and doing huge hours and the extra travel to Shellharbour at weekends was getting to me, so I thought Wollongong’s a pretty large place so why couldn’t we have our own longboard club in the Gong?

Well I tossed the idea around for about a year with Youngie whilst we would be driving together down the coast to compete at some ungodly hour until finally we decided “Stuff it! Let’s give it a go!”

I think it was the next weekend we were surfing at Bellambi and talking to this guy we’d seen there in the water a few times before and we ran the idea past him just to see his reaction. “Hell Yeah!” I think he said without hesitation. His name was Peter Wearing and he was, as it turned out, a member of Bellambi Surf Club and the Bellambi Bluebottles winter swimming group.

The three of us had a little meeting in the carpark and exchanged names and phone numbers and decided on a plan to ask as many people we could find surfing Mals if they would like to become members of this no-name board club.

Peter printed off flyers to hand out, we placed them under wiper blades on cars at several beaches, taped them to light poles and distributed them to local board shops. We had settled on the date 1st March 1992, about four weeks away for the formation and first ever point score. This gave us time to build up numbers and figure out how to run a contest without a timer and hooter (we used a watch and whistle), no contest shirts (we organized coloured singlets of our own). We drew up judges sheets, tally and running point score sheets and had them printed ready to go.

We were fully organized and the numbers were building up. We were starting to get a really good vibe and we were pumped as the excitement continued to build and build.

After a near sleepless night, there we were, contest day and down at Bellambi people started arriving, what a buzz as we had no idea who would turn up as a lot of them we didn’t know. Seventeen new members were keen to join up and 15 competed with a further 6 grommets surfing.

We had a little meeting to explain how a surfing contest works and explained how they needed to judge and when to judge. We explained how you get points and how they were judged in the water, and about the coloured heat flags and heat time of 20 minutes, etc. They were mostly newbys to surfing contests and a lot of them were nervous as hell.

From memory the surf was very average but everyone loved it and each of them came in after their heats absolutely beaming. Nobody cared if they won or lost, it was all about the fun and all the new people they were meeting. When we finished the point score we all went home, picked up our wives/partners/girlfriends and kids and went around to Peter and Linda Wearing’s home for a BBQ and a few drinks and had a great and very memorable afternoon and fantastic day.

That was it, Wollongong had its first modern Mal longboard club since the end of the original longboard era which ended in 1967 – 68 about 24 years earlier.

I think before we left the beach at the first pointscore we formed a 5 person committee.

Points of discussion – Club Name to be voted by members

– Chase up sponsorship by George K

– Newsletter by Geoff B

– Catering by Frank B

We decided to hold a presentation night in July and to hold our AGMs the first Sunday in August. This decision would enable us to get the club up and running properly and to start our point scores year from August to July each year and in line with some other clubs.

Club newsletters were a big thing for most clubs and for ours they were very important. We wanted them to always record contest results and other relevant things so we always had a record. We always made sure that everybody received theirs in Wednesday’s mail just before each point score and it was always something that you looked forward to receiving. It always had something really interesting and we have had some great editors like Geoff Burling, Steve Thrush, Robert Kennedy, Glen Moore and Greg Nicholls. 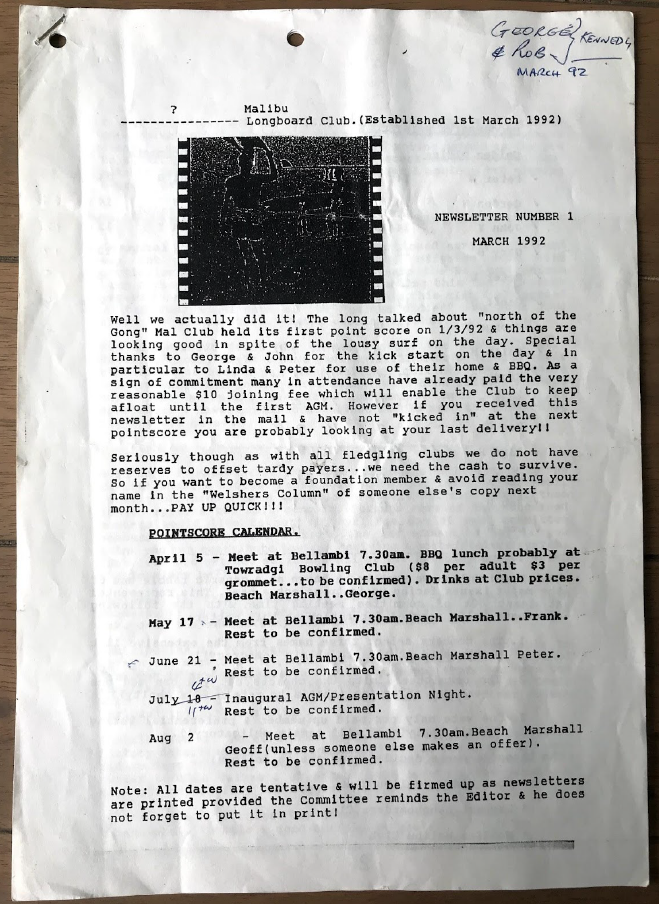 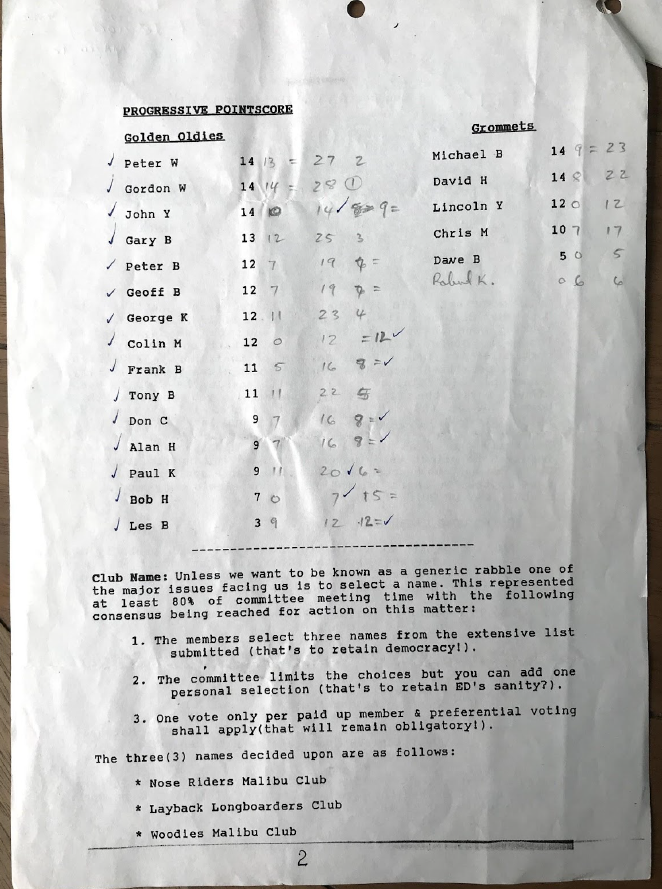 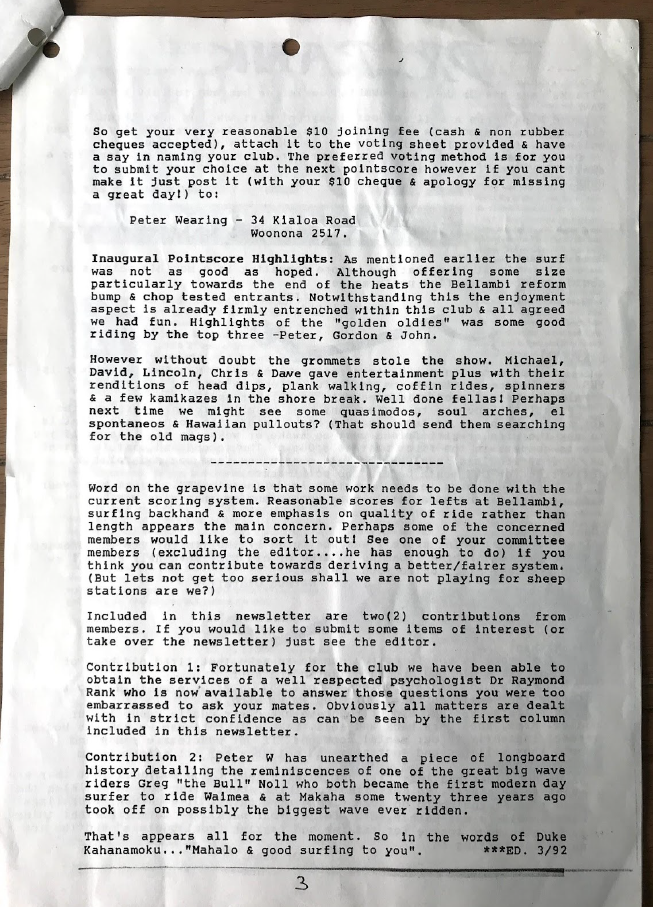 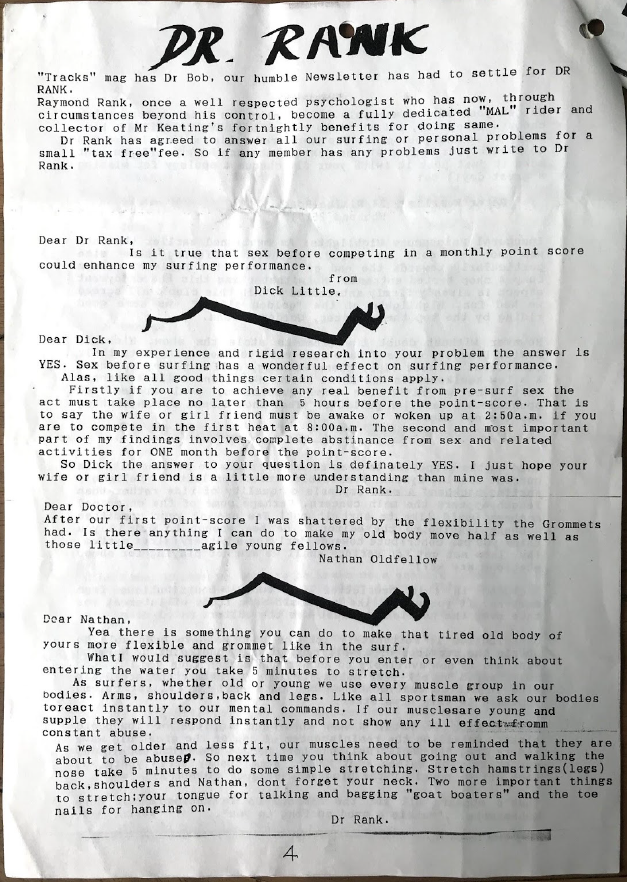 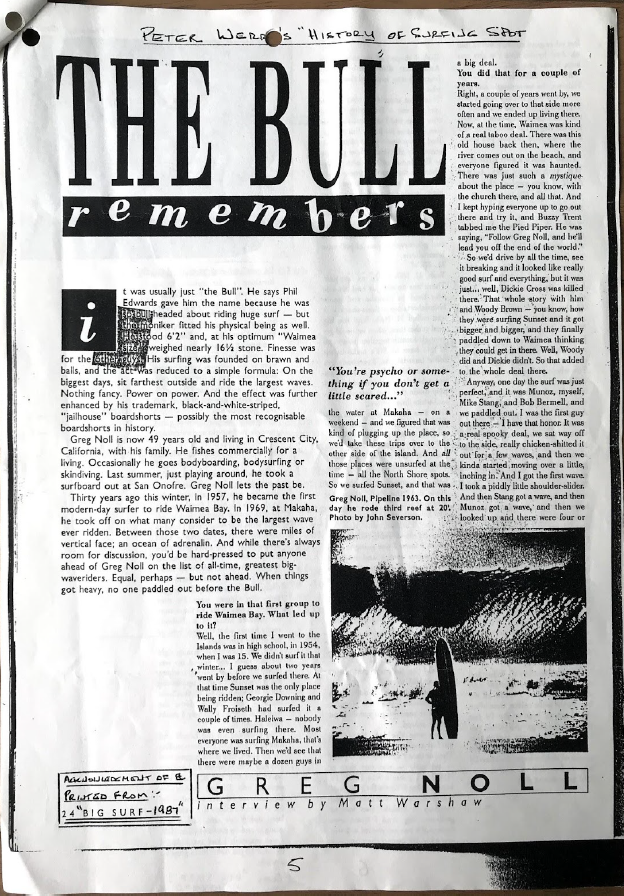 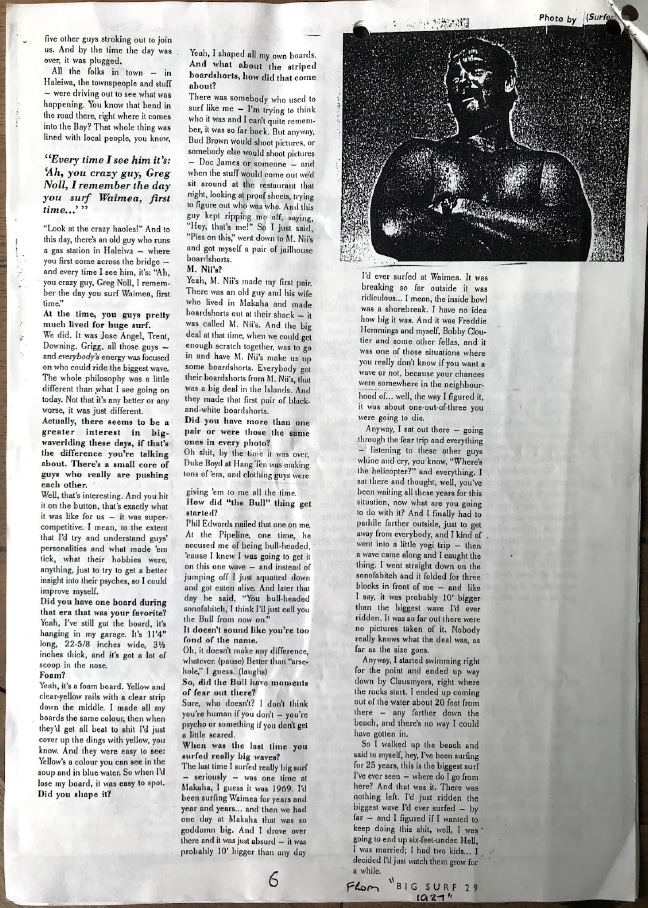 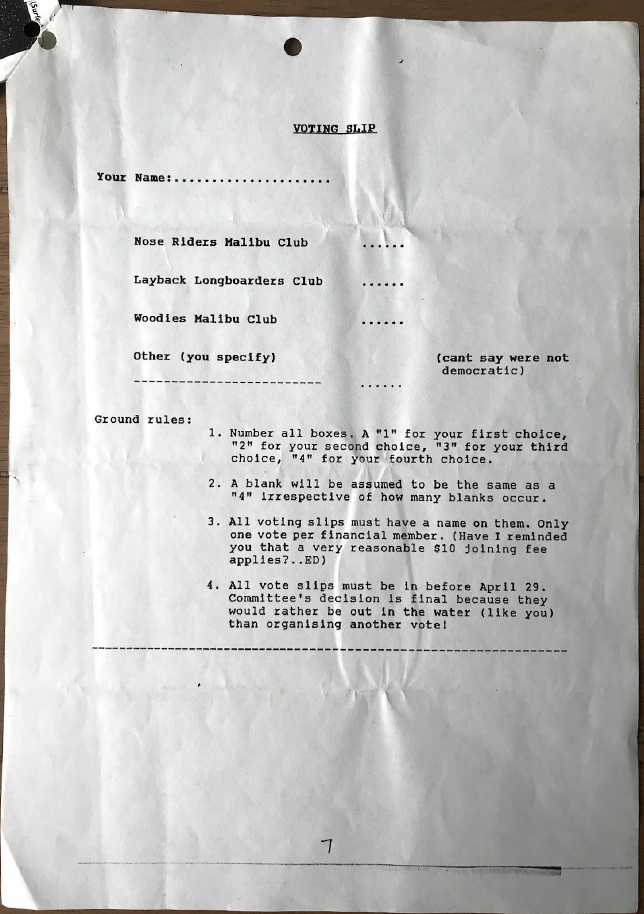 George approached Dave Byrne on 9th April 1992 regarding a possible sponsorship for our new board club. I explained my vision for the club and about how great our first point score went and that we have formed a committee to steer the club going forward…well before I’d finished Dave came in with this incredibly generous offer and I accepted it on behalf of the club there and then.

After leaving Dave’s, I immediately phoned each committee member and told them the great news and they were stoked.

Dave Byrne has been our sole surf products sponsor from that day continuously through to when they closed their Fairy Meadow Shop and beyond. Dave is a Life Member of our club and has continued to support us for more than 29 years.

It is not generally known but Dave Byrne I think kick-started the modern long boarding era in the Illawarra, he at the very least gave it a hell of a boost!

A few of us older guys (mid 30’s on) were starting to have modern longboards made by our local board makers, Carabine’s Terry (Snake) Bishop, Dave Byrne and Skipp Surfboards.

Dave was approached by Malibu Rum to organise a longboard contest at North Beach that was held in January 1986, to promote their products. Dave in turn sought the help of some guy’s from Shellharbour who were in the midst of trying to form the DV8’s Longboard Club but lacked the numbers. They were members of Southbridge Borders, a short board club. They were allowed to have a couple of heats of Mal’s on comp days, but they were struggling to start a separate longboard club due to lack of numbers.

Being involved with the Malibu Rum contest brought a lot of longboard surfers (not that there were many) from the Illawarra and beyond together for the first time, thus enabling the DV8’s to enlist many of these surfers and to finally form their club as a separate entity.

We have been very fortunate and very appreciative of Dave’s expertise, generosity and service to our club over many years.

Thank you very, very much Dave. 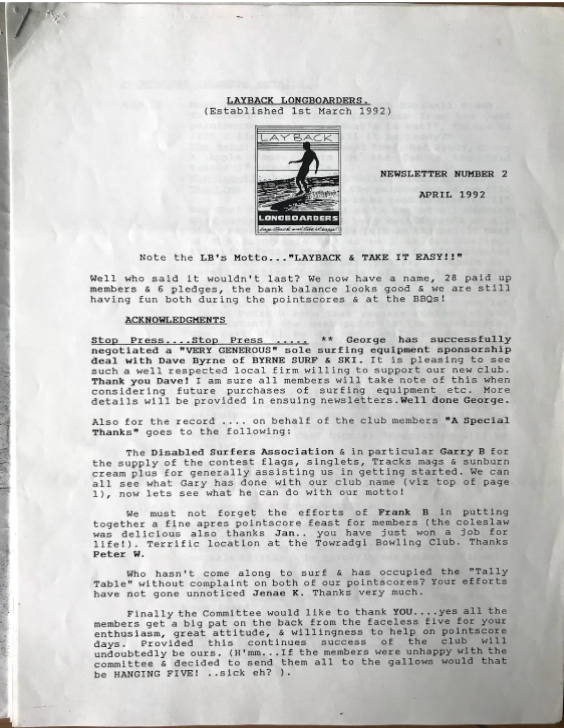 My daughter Jenae (14 years old at the time), as per the note in the newsletter on this page, did the tallying for our club for many years and was sought out by other board clubs eg, The Wollongong Boogie Boarders and The Christian Surfers to help set up their contests, scoring and tallying systems. 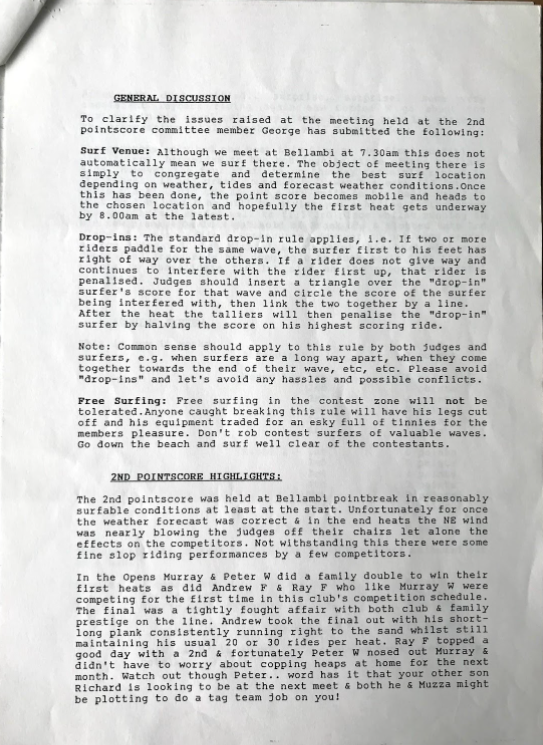 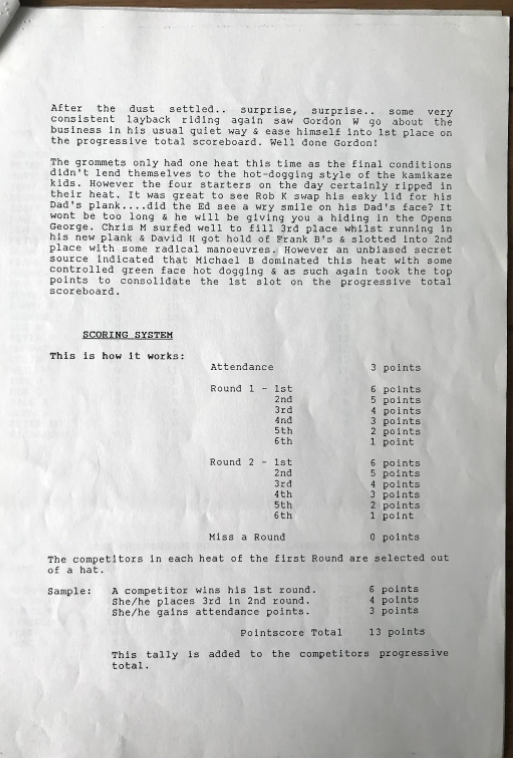 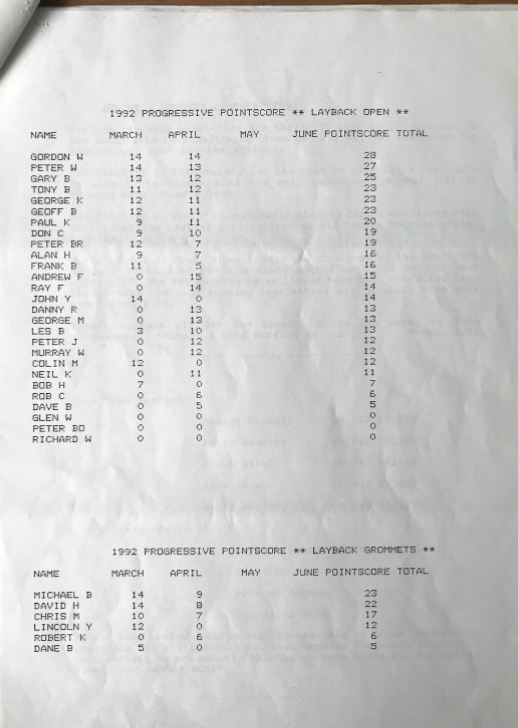 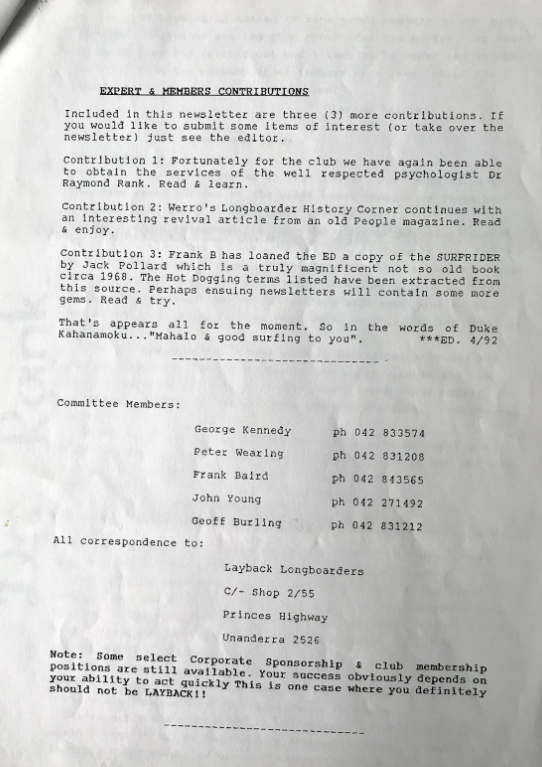 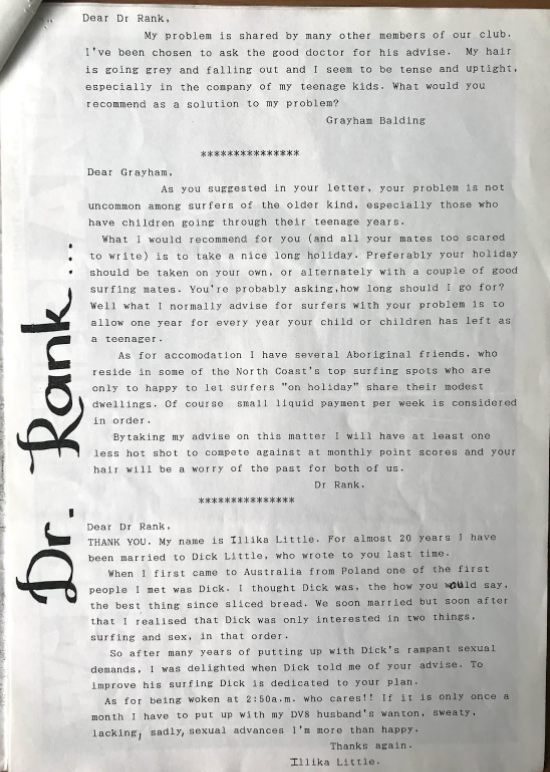 Our club logo was designed, developed and printed after approval from our committee and a rough sketch of it was put on the cover of our 2rd newsletter.

The finished, polished up job was first used in our 3rd newsletter of May 1992 and was printed on yellow paper.

We were all very pleased with this classy logo because it exactly represented and encapsulated our motto and the feel of our club, smooth, cruisey, professional, and with timeless appeal. When you look at this logo if only for an instant you get a good vibe and feeling immediately and this can and has been a big help with gaining quality sponsorships large and small.

It was designed by one of the most respected surfers in Australia both in terms of his surfing ability but particularly for founding, running and managing DSA. The Dissabled Surfers Association Of Australia. Gary Blaschke was a commercial artist and had his own sign writing business, Rainbow Signs and was based in Sydney.

Gary was a highly respected member of our club who offered great advice and also designed, built and donated most of our original trophies eg. Opens Winners shield, and all the fun awards like the No Balls No Falls, Snake award, Drop-in award, etc. He also donated our banner and did a lot of signage for our presentation nights and other functions.

Gary resigned after a few years due to his heavy commitments with the DSA.